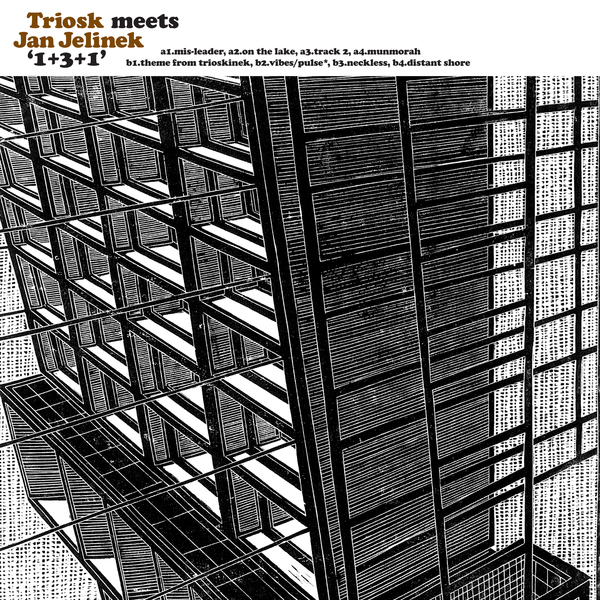 A long-lost vinyl album is back in stock: for the last 18 years, 1+3+1 by Triosk meets Jan Jelinek, originally released in 2003 on ~scape, existed only as a digital download. Now the remastered album is available again on vinyl.

“Hence the album's titled 1+3+1 – it’s a reference to how it was made. Jan Jelinek sent us stuff, then we did stuff, then he added the final touches. He did a little bit more editing and production and mixed and mastered it in Berlin.”
Interview Laurence Pike, Jazzgroove

“1+3+1 is not minimalist jazz; it is loop-based jazz, influenced and produced by a minimalist composer, and then given to a jazz trio with post-rock tendencies.”
Pitchfork

“On Theme from Trioskinek, a jaunty, up-tempo tune not unlike the Charlie Brown theme is dragged down by Jelinek’s compressed sound effects, giving the impression of a runner training underwater, straining for grace with every step. If electric jazz had its Bitches Brew, it’s only fitting that someone, someday, would give us Glitches Brew.”
SFWeekly

“Triosk play as if they wanted to take Jelinek’s samples back to the jazz of the late sixties and early seventies.”
TAZ Tageszeitung

“This music is a fascinating exploration of the shadowground between acoustic jazz and studio processing. It picks up a particular dialogue about improvised performance and postproduction initiated in the 1970s by Teo Macero and Miles Davis.”
Jazzwise Magazine

All tracks are written and produced by Triosk and Jan Jelinek, Syndney/Berlin 2002/2003. *written and produced by Laurence Pike and Jan Jelinek. Sydney recording engineered by Steve McMillan at Megaphon Studios.
Loops on tracks 1, 4, 6 and 7 are based on material from the EP ‘en/of 004’ (Jan Jelinek: ICE Compositions).
Triosk:
Laurence Pike – drums/vibes, piano on Vibes/Pulse
Adrian Klumpes – piano/fender rhodes, vibes on ‘Mis-Leader’ & solo on On The Lake
Ben ‘Donny’ Waples – double bass

We would like to thank: Alex and Brie for love and support, Richo, the Grug for his MD, James Waples for the vibes, the Lockes for glass repair, Jörn Gerstenberg and Rüdiger Lange. Cover Image: detail of Blick zurück by Jörn Gerstenberg.
Originally released 2003 on scape music.
Vinyl remastered by Kassian Troyer, 2021.