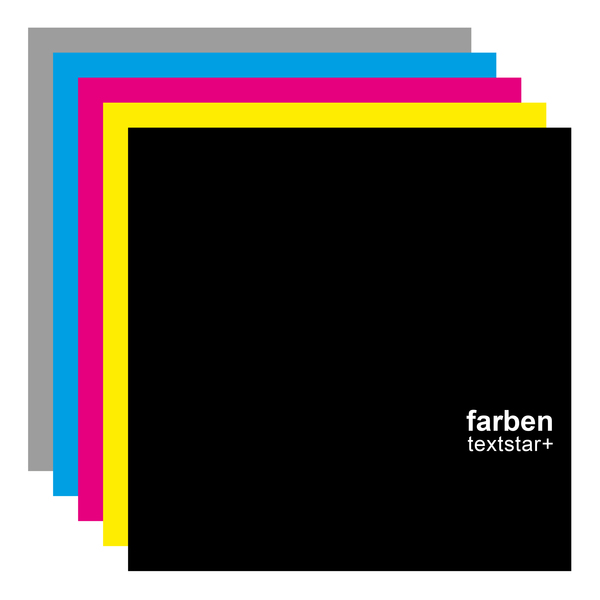 On textstar+ Jan Jelinek brings together the material from the CMYK series, four EPs he released between 1999 and 2002 under the pseudonym farben (the German word for both colours and paints), on a vinyl double LP for the first time. The selection of tracks has been remastered from the original tapes, joined by two additional pieces that appeared on compilations during the same period.

A Polaroid. Still life with tangled leads and consumer electronics, late twentieth century. Black and various shades of dirty white are the dominant non-colours. The image’s spatial depth remains diffuse, the links between its elements speculative. A note stuck to the wall (a legend, perhaps, or an all-explaining blueprint in text form?) is impossible to decipher. You can’t see what connects the picture’s signs. You have to hear it.

farben says: Every sound is a text. A bearer of meaning in search of a reader. Hoping the ideas inscribed in its autonomous existence will be understood as intended. While its beauty lies precisely in misunderstanding, in reading the coded message a new way every time. A thousand colours of sound, a thousand different ways to hear, to see, to understand.

On textstar+ Jan Jelinek brings together the material from the CMYK series, four EPs he released between 1999 and 2002 under the pseudonym farben (the German word for both colours and paints), on a vinyl double LP for the first time. The selection of tracks has been remastered from the original tapes, joined by two additional pieces that appeared on compilations during the same period. Another new element is the Polaroid, showing the origins of a world: Jelinek’s home studio in Berlin at the time.

farben says: Move your body! The project has its roots in Jelinek’s love of house as a reductionist vision of soul. Of four to the floor as a proposition that can be accessed anywhere. Of electronic dance music as a realm of possibility that can be continually expanded. farben was written as contemporary house music. As a text about excitement and euphoria. The arrangements were made directly while recording to DAT, on a twelve-channel mixing desk. Several track titles suggest a link to live concerts, coupled with the context of machine music and bedroom recording. Others affirm pop music’s most extravagant stock phrases about various states of love.

Jelinek produced the tracks with the aim of making music for dancefloors. An idea that failed very productively. In the locations to which it was originally addressed, the project barely figured. But people did listen, and they listened all the more closely to this music that opened up new acoustic and associative scope for house. farben is the opposite of genre: a music spawning new terms (clicks & cuts, micro-house) that never manage to fully capture it.

farben says: Signifiers. The four CMYK EPs are designed as a network of references that cannot be missed but that can also never be precisely deciphered. The vectors of sound, word and image point to Isaac Hayes and Ornette Coleman, to Detroit and the first generation of the Red Army Faction, to Karl Marx and Friedrich Engels. So multifarious that they are distorted to the point of recognition. Overall we hear sonic docufictions whose appealing vagueness derives precisely from this oscillation between clarity and ambiguity, which is also the source of their poetry: the lyricism of the pure circulation of signs.

The artwork is based on photographs of former Red Army Faction members, broken down into the four colours of the CMYK model. The motifs dissolve into individual dots of a single colour, so close to the faces that their expressions are only hinted at. Taken together, the individual colours compose a new whole out of fragmentary material, defying definition and thus maintaining their vibrancy. The same occurs on the level of sound. The sampler Jelinek used for these tracks had to be fed with floppy disks, imposing a memory limit of 1.44 megabytes per audio quotation from soul or jazz records. As a necessary consequence of this, the individual references, like the dots of colour, are dissolved into details and abstractions. They appear as splinters that recombine in new ways to create new meanings. The joy of collapsing metaphors.

farben says: New departures. Even two decades after its original release, textstar+ does not come across as an epitaph to the modern era. Instead, it appears as a euphoric affirmation of the utopias of the twentieth century, translated into new sound texts via the aesthetic strategies of abstraction, collage, networking and speculation. 1.44 megabytes of history, one thousand signifiers, one album. From “Live ...” to “... Love”. (Arno Raffeiner, 2021)